Learn more about past communities who brought new life to public spaces through the Levitt AMP Music Series of 10 free concerts. The Levitt AMP summer concert series was part of the city’s ongoing effort to reenergize the dormant Town Square Park located downtown and turn it into a safe, welcoming destination for community gatherings by residents and tourists alike.

Presented by Anchorage Downtown Partnership, a nonprofit that provides vital services throughout the Downtown Improvement District and produces events for the community. Bellingham presented its Levitt AMP summer concert series in two locations—on Bay Street in the heart of the Arts District, expanding upon efforts to use the arts to revitalize and improve the downtown, and in nearby Maritime Heritage Park, where free, live music attracted new visitors and helped revitalize a beautiful, underused public space. Rector & Visitors of the University of Virginia

The IX Art Park, an “interactive space for spontaneous dreaming,” provided the ideal environment for the diverse populations involved in Charlottesville’s thriving music scene—University of Virginia students, residents from the neighborhood and music fans from all parts of town—came together and enjoyed a season of free, live music during the Levitt AMP Music Series surrounded by beautiful green spaces and public art. The Levitt AMP Chattanooga Music Series invigorated the lawn of the Bessie Smith Cultural Center in the historic Martin Luther King district, and shone a light on the area’s renowned musical heritage while reestablishing it as a thriving cultural destination.

Presented by the Urban League of Greater Chattanooga, a local affiliate of the National Urban League that enables community members to secure economic self-reliance.

Green Space on the Crosstie Walk at College Street

Once the site of railroad tracks that both physically and psychologically divided the town, the re-imagined Green Space on the Crosstie Walk at College Street brought people together of all backgrounds for the shared experience of free music under the stars. Its Levitt AMP Music Series also celebrated the region’s rich musical legacy of Mississippi Delta Blues.

Presented by Delta State University Foundation, a nonprofit that provides diverse funding for a wide range of campus initiatives including academics, athletics, capital projects and arts and culture. 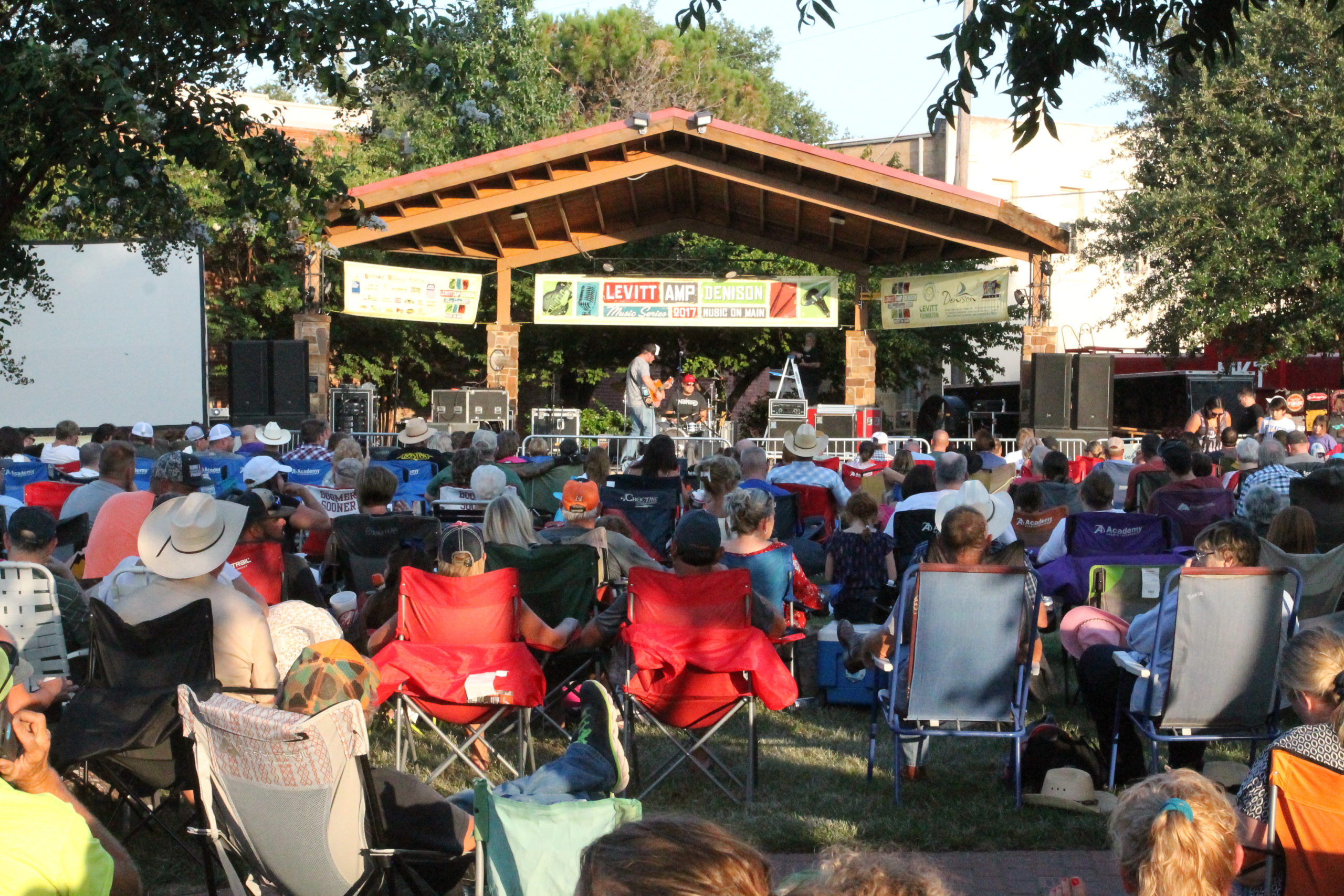 The California Center for the Arts, Escondido

The Levitt AMP Escondido Music Series brought new life to the ‘Great Green Lawn’ at Grape Day Park—the oldest park in the city— and filled the sprawling, centrally-located green space with family-friendly entertainment, highlighting its potential to serve as a gathering place for the city’s diverse communities.

Presented by the California Center for the Arts, Escondido, a nonprofit arts center that brings people together to discover, create, and celebrate both the visual and performing arts, in partnership with the Escondido Chamber of Commerce, Palomar College and the San Diego Music Foundation. The first Levitt AMP Green Bay Music Series infused the joy of free, live music into Leicht Memorial Park, an underused riverfront park in the heart of Green Bay’s downtown area. The series transformed this three-block, open green space into a welcoming, community-wide destination for concertgoers to come together and enjoy an eclectic lineup of music, celebrating the city’s increasingly rich diversity.

Presented by On Broadway, Inc., an organization that promotes the revitalization of the historic Broadway District in Northeast Wisconsin by hosting many exciting events that contribute to a sustainable and thriving urban community. 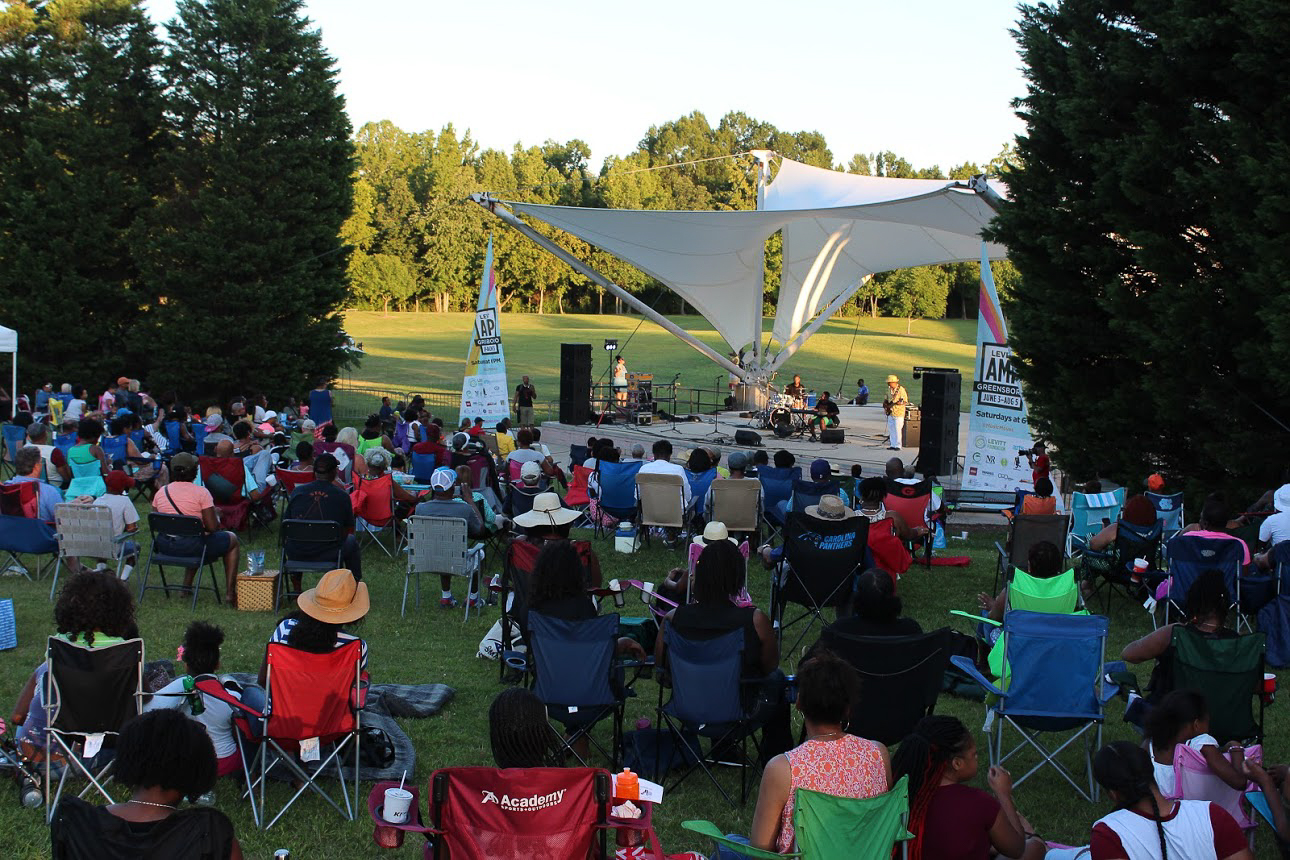 The Levitt AMP Greensboro Music Series introduced residents to the newly renovated, yet underused Jimmie I. Barber Park in East Greensboro, bringing the city’s diverse populations together to enjoy a broad range of musical styles.

Presented by Arts Greensboro, a nonprofit catalyst for innovation that supports Greensboro’s arts scene through grants, marketing support and other impactful initiatives and services. 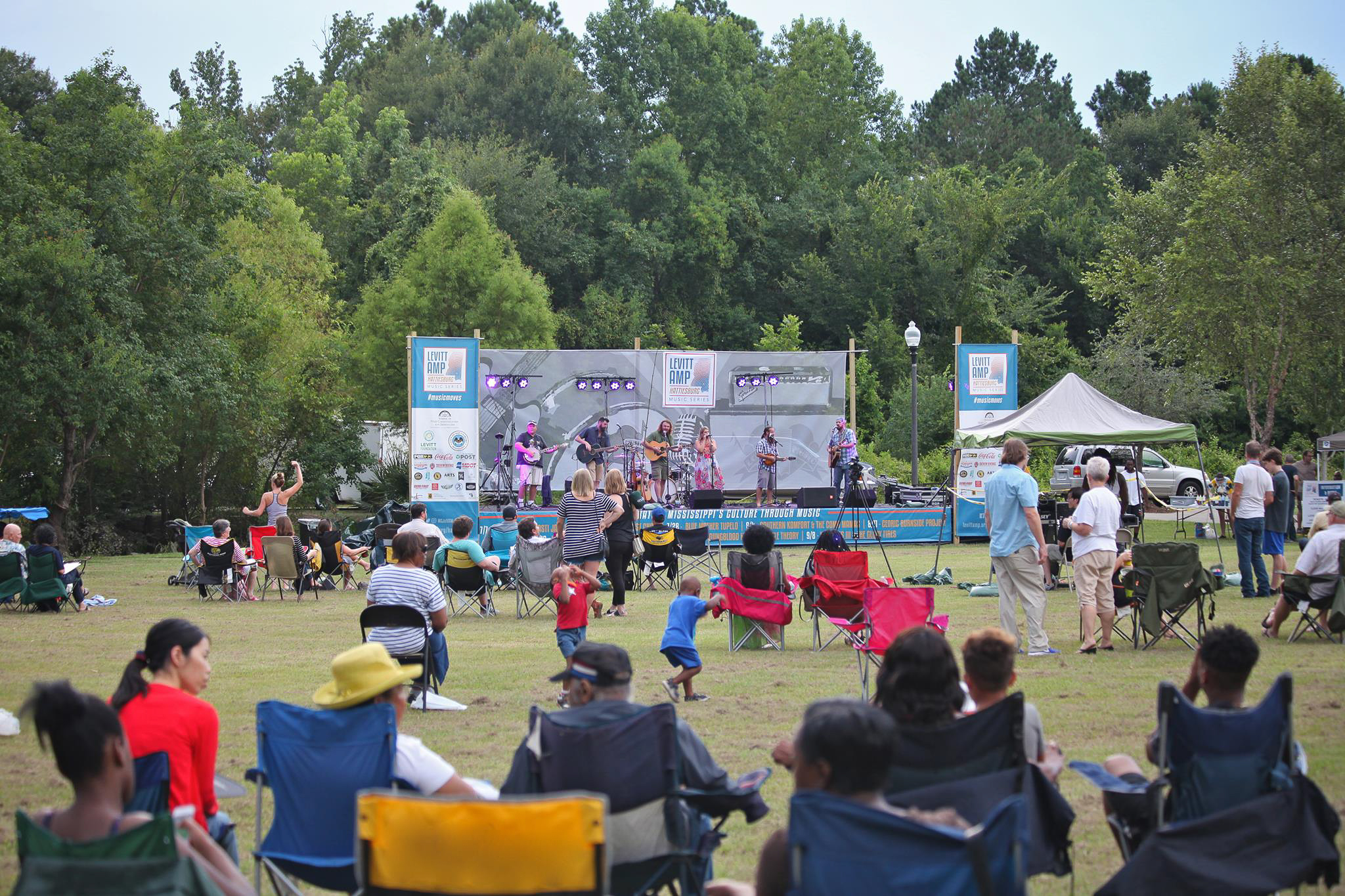 The Levitt AMP Hattiesburg Music Series transformed Chain Park into the city’s cultural gateway and positioned the space as the focal point for community enrichment, strengthening the relationship between the University, the city’s residents and the arts. 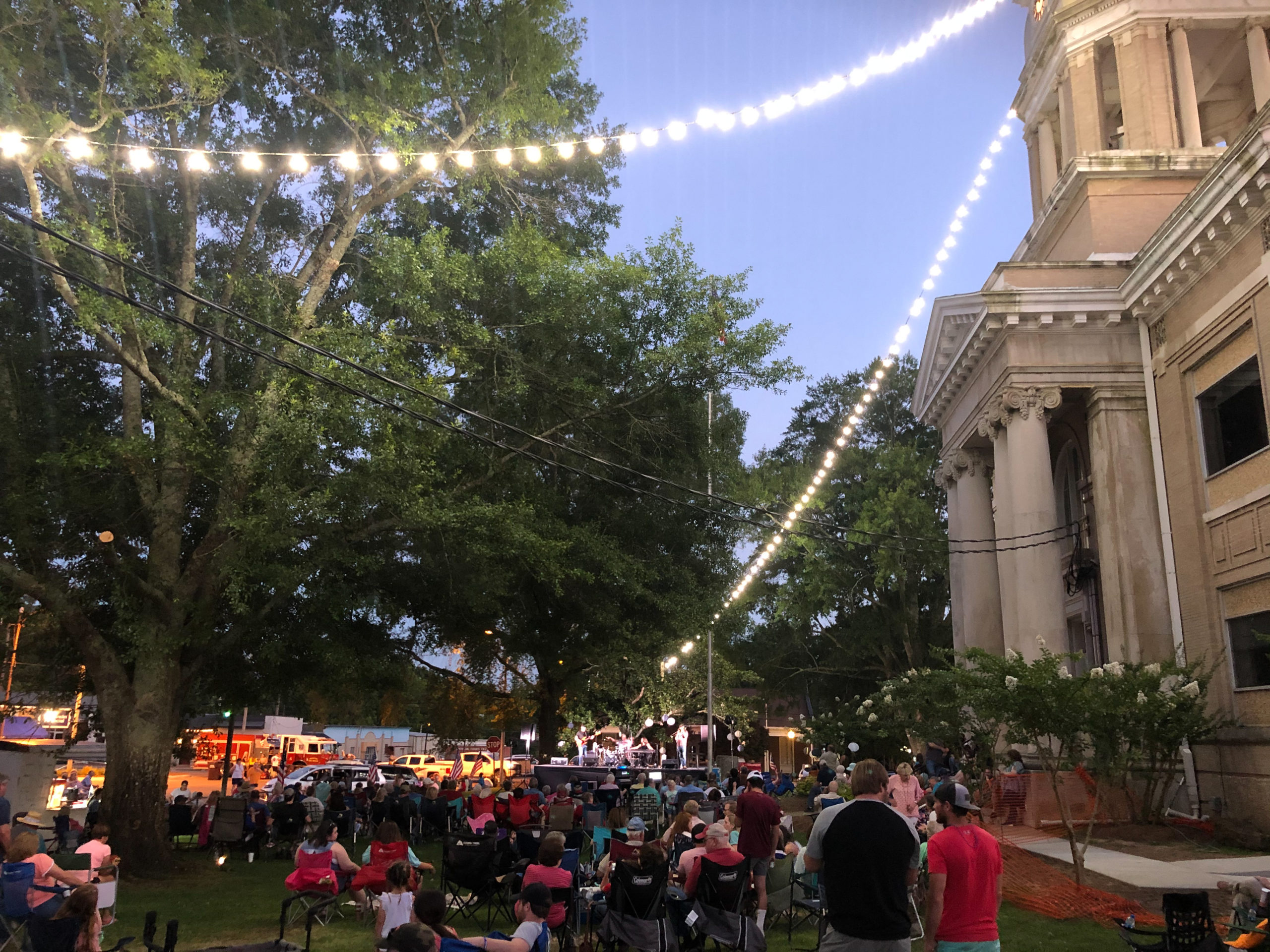 The first Levitt AMP Houston Music Series, presented by Potter’s House, created an inclusive, music-filled gathering space within the scenic 10-acre Legion Park. Situated just blocks away from the city’s once bustling downtown, the 2021 series highlighted the potential of the underused green space and brought momentum to local efforts to energize the city’s economy through strategic cultural initiatives.

Presented by The Potter’s House Family Service Center, whose mission is to enrich and enhance the quality of life of children and families in Houston, Mississippi and the surrounding communities, in partnership with The Chickasaw Development Foundation. Presented by Jacksonville Main Street, a nonprofit which enhances the social and economic health of Jacksonville by working to revitalize the city’s downtown district.

The Park at the Horse Farm

Saved from commercial development by a community-wide movement to preserve the last large, undeveloped property within the city, the Park at the Horse Farm hosted the Levitt AMP Lafayette Music Series among acres of rolling hills, open meadows, forested ravines and large live oak trees—a beloved treasure of Cajun Country.

Presented by the Lafayette Public Trust Financing Authority, which supports the city and parish of Lafayette through a range of finance-related programs and community involvement efforts.

The Levitt AMP Merced Music series helped highlight the city’s iconic theatre, Merced Open Air Theatre, located in Applegate Park. Not being utilized to its fullest potential, this beautiful, historical monument was almost forgotten about. That is, until a local couple got involved, excited at the prospect of free Levitt concerts in the park, and the City of Merced matched their donation. As a central community space, the Merced Open Air Theatre possessed the ability to bridge the divides in the city and functioned as a universal place where people from all backgrounds could enjoy the free music being played for them.

Presented by UC Merced, a 4-year public university that is the tenth of the UC campuses. The university is dedicated to invigorating the community and providing a well-rounded, research-driven education. The Levitt AMP Midvale Music Series in Midvale City Park—a green space surrounded by underserved communities—elevated the existing free summer concert series at the Midvale Outdoor Stage in the Park, building upon the city’s efforts to revitalize Midvale City Park and the adjacent community by providing all residents a place to gather and enjoy high quality arts experiences.

Presented by the Midvale Arts Council, which provides opportunities for Midvale citizens of all ages and backgrounds to experience the positive benefits of the arts and local culture. The Park Along the River

The Levitt AMP New Albany Music Series gave residents of all ages and backgrounds a reason to gather in the town’s  renovated Park Along the River—creating a new, positive perception of this centrally-located, yet long-neglected park adjacent to the city’s downtown area.

Presented by the City of New Albany’s Tourism Department, which produces enriching family experiences and inspires the city’s revitalization by promoting New Albany as a tourist destination. 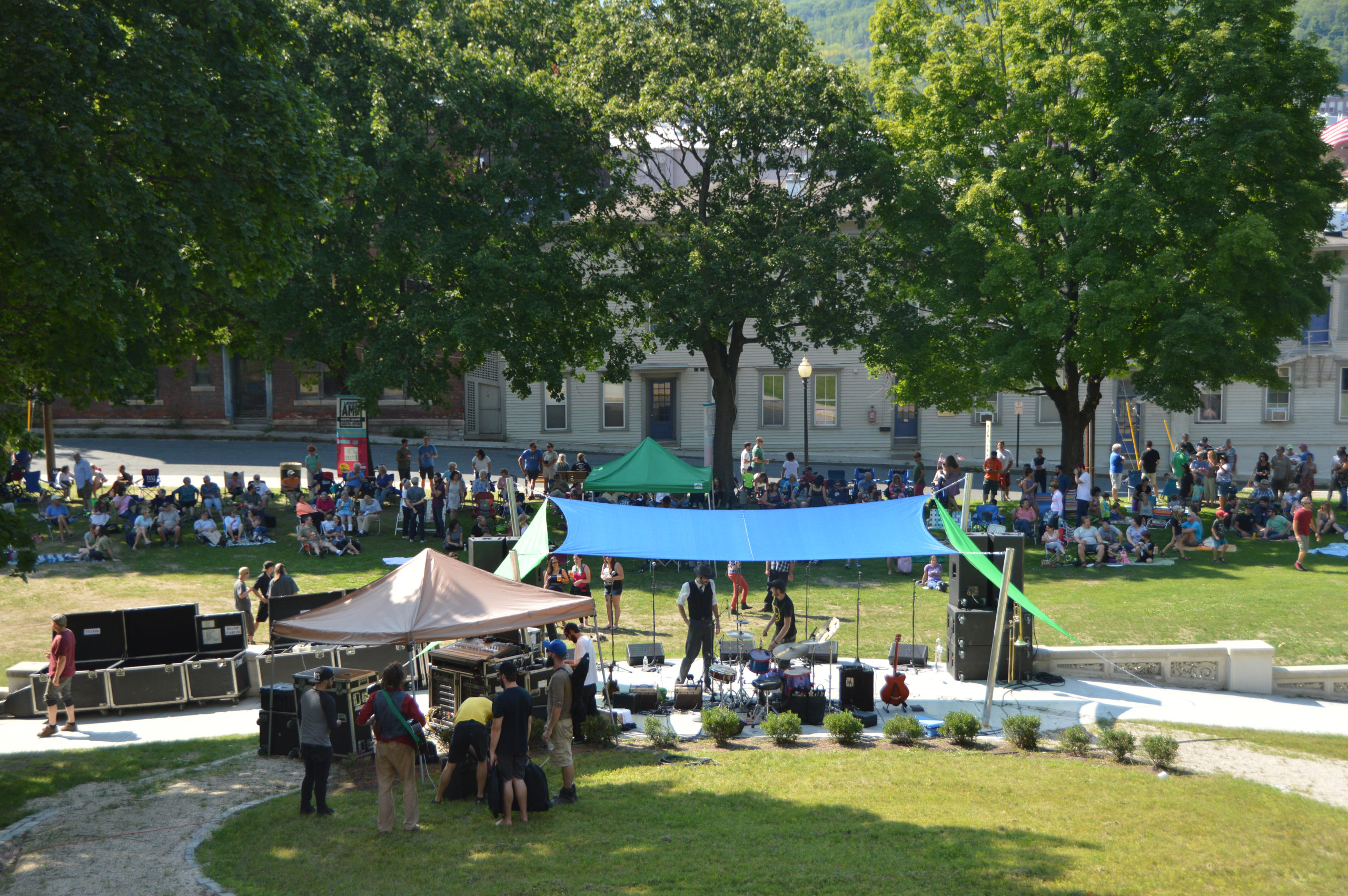 Presented by AMP concerts, a nonprofit dedicated to enriching the cultural landscape of Northern New Mexico through musical experiences and community events.

PAST FRIENDS OF LEVITT PARTNERS

Learn more about past public/private partnerships that revitalized once neglected public spaces through 50+ free concerts each year. As the first venture philanthropy project of the Levitt Foundation, Levitt Pavilion Pasadena launched in 2003. Since its opening, the venue has been celebrated for bringing vitality and high-caliber programming back to Memorial Park, which for years prior was largely abandoned and a magnet for crime. Through 2017, free Levitt concerts at the restored WPA-era gold bandshell brought people of all ages and backgrounds together from both Pasadena and the greater Los Angeles metro region, attracting over 75,000 people each summer. Read more. The WPA-era bandshell in Overton Park was built in 1936 to be a glorious “pledge to the future of music in Memphis.” For five decades, the Shell showcased the city’s rich musical sounds, including where Elvis Presley performed what some historians call the first “rock n roll” concert in 1954, and where countless other legends graced the stage, including Johnny Cash, Wanda Jackson, Webb Pierce, Carla Thomas, Booker T. Jones, Bonnie Raitt and even the Grateful Dead. Yet by the late 20th century, the iconic landmark became dilapidated and was nearly demolished due to disinvestment and neglect. Local preservation campaigns like “Save the Shell” struggled to raise sufficient funds to ensure its viability. Recognizing the potential community impact of revitalizing the venue, in 2005 the Levitt Foundation, led by Liz Levitt Hirsch, partnered with community and city leaders to bring the Shell back to life, saving the bandshell from demolition and launching the most notable moment of renaissance in the Shell’s history: The Levitt Era. Read more.