”He was quite a character, a real original. He never cared what other people did. He did things his way.” A fashion businessman, philanthropist and outspoken advocate for the arts, Mortimer Levitt was known for his keen sense of style, entrepreneurial spirit and self-proclaimed “candor that bordered on outrageous.” Rising from rags to riches by the success of his men’s clothing company, The Custom Shop, Mortimer became a major patron of the arts, taking special pride in his support of opportunities for young artists and musicians. In 1966, along with his wife, Mimi, he founded the Levitt Foundation, to support the arts, culture and education. Mortimer was the primary benefactor of the original Levitt Pavilion in Westport, Conn., and later in life, laid the groundwork for his family foundation to become a funder of free outdoor concerts in communities across the country.

Mortimer’s long held belief that all people, regardless of their economic background, should have access to the joy of free, outdoor music continues to inspire the work of the Foundation. Outside of his philanthropic activities, Mortimer produced a variety of plays, films, and television programs, authored five books, and remained an avid skier, sailor, pianist, and tennis player well into his twilight years. He passed away in 2005 at the age of 98.

Early Years and The Custom Shop

The oldest of three sons, Mortimer Levitt was born in Brooklyn in 1907 to immigrant parents of humble means. His father, Sam, was a street vendor at the dazzling Luna Park on Coney Island, and as a boy, Mortimer would often accompany him to work. Unable to afford admission to the park’s rides and shows, Mortimer would stand outside the gate of ticketed events, longingly taking in the energy of the music from afar. These early childhood experiences inspired his later support of free outdoor music and belief in making the arts accessible to everyone, regardless of one’s ability to pay. In 1923, when Mortimer was 16 years old, he dropped out of school to help support his mother and younger brothers. He found work at a textile firm and eventually became a fabric salesman. A connoisseur of clothing from an early age, Mortimer spent what little spare earnings he had on flashy garments, sporting a bowtie and a cane even as a teenager. He found, however, that standard-sized shirts rarely fit him properly, and were usually either too loose in the neck or too tight in the chest. Through a coupon found in the back of a magazine, Mortimer bought a custom-made suit at a deep discount and found the difference to be remarkable. Realizing that many other men were wearing ill-fitting standard-sized garments, and that custom-tailored shirts were only affordable to a select few, Mortimer saw an opportunity.

In 1937, at the age of 30, after he was fired from his salesman job for going to the movies in the afternoon, Mortimer opened The Custom Shop in Manhattan’s garment district offering custom-made men’s shirts for just $2.15 each (equivalent to $40.85 today). “I was so sure my new business would be successful, and so fearful that my ‘fabulous idea’ would be copied, that I actually kept it a secret from the real estate agent who rented me my pilot store,” Mortimer later recalled. This hunch proved to be correct, and over the next four years, The Custom Shop expanded to nine locations across the East Coast and generated millions of dollars in revenue. Within four years, the success of his business enabled Mortimer to retire from day-to-day management in 1941 (though he remained its sole owner and continued going to the office on a regular basis until he sold the company in 1997). Mortimer took the need to dress well so seriously that he tried to stop the rise of Casual Friday. As the concept began to take hold in the early ‘90s for office workers to wear more casual clothing, Mortimer reached out to the heads of major corporations attempting to stop the practice but was unsuccessful. The Custom Shop eventually grew to 70 locations across the country, and served illustrious clients including President Lyndon B. Johnson, actor Clark Gable and corporate CEOs. 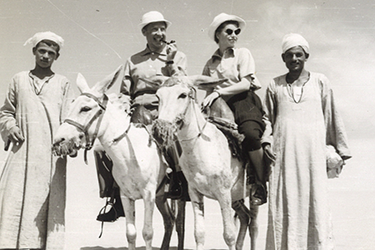 After retiring, Mortimer embarked on a six-month road tour of the United States. Upon returning to New York, he immersed himself in the city’s emerging arts scene and opened his own art gallery. It was at another Manhattan gallery opening where he met Annemarie “Mimi” Gratzinger in 1947, then a senior assistant to Alfred Barr, the founding director of the Museum of Modern Art. The two engaged in a lively debate on the merits of a particular painting, and to Mimi’s surprise, Mortimer called her a short time later to ask her out on a date. To Mimi’s astonishment, Mortimer insisted she change her outfit when he picked her up for their date, saying Mimi needed dressier attire to go to The Pierre, an upscale Manhattan hotel. Taken with Mimi’s intelligence and taste (born in Vienna, she spoke five languages and was well versed in opera), Mortimer proposed marriage, and the two wed in 1948. “Her intellect, sophistication, and generosity of spirit opened my eyes to additional aspects of living,” Mortimer later wrote of his wife. The couple had two children, Elizabeth “Liz” and Peter.

Mortimer and Mimi loved to entertain. Mimi was known for hosting imaginative charity events and salons at the couple’s Manhattan home, often inviting aspiring young musicians to perform. “It was my husband’s idea to start with music at home,” Mimi was quoted in a . “He prefers that to the concert hall. He should have lived two or three hundred years ago and had his own castle and performances written for him. He would have gotten a kick out of that.”

“Retirement” and the first Levitt Pavilion

Mortimer’s initial retirement from The Custom Shop proved to be short lived, and over the years he would return to run the business when needed. In 1960, for example, he returned to the business when George E. Zimmerman, the executive running day-to-day operations, left to start a similar company with manufacturing and retail giant Genesco, Inc. While Zimmerman’s operation was ultimately unsuccessful, Mortimer embraced his own return to the company and launched a line of ties to sell with his shirts. Mortimer then also expanded the business to include men’s accessories, custom made suits and women’s shirts. In the early 1970s, residents of Westport, Connecticut, where the Levitt family owned a summer residence, sought to build an outdoor stage for the community to enjoy local acts and entertainment from New York City. The Town of Westport donated a problematic landfill in the center of the town, and a fund drive ensued. When the fundraising committee approached Mortimer and Mimi about the project, they immediately recognized its community value and became its largest private contributors. To their surprise, the town named the venue in their honor, as revealed on opening night in 1974 when the first Levitt Pavilion opened to the public. Mortimer took great pride in the fact that the concerts were always free and open to the public, and he loved that everyone was welcome to walk under the Coney Island inspired arch at the venue’s entrance, a nod to his childhood. The free concerts at the Levitt Pavilion in Westport would ultimately spark Mortimer’s idea for a national network of Levitt venues across the country.

In addition to supporting the Levitt Pavilion, Mortimer and Mimi became major patrons of numerous educational institutions, performing arts organizations, and youth music programs. Mortimer’s philanthropy was inspired by his own innate curiosity and life experiences. In his 30s, for example, Mortimer enrolled in a New York University adult extension course because he thought he was a slow reader. Mortimer was told he had a high IQ but was skeptical because he hadn’t done well in high school. Mortimer then confirmed that his high school had known his IQ score while he was a student, though hadn’t encouraged him to continue his education. Because of that experience, “he was inspired to open young minds, arouse their interest in learning and to discover their aptitudes and explore them to the fullest,” said Susan Wadsworth, Director of Young Concert Artists, Inc., an organization supported by Mortimer which nurtures promising classical musicians at the beginning of their careers.

Mortimer also had a passion for the theater. “He was a behind the scenes enabler who made things happen,” said William H. Honan, former Culture Editor of The New York Times. The most well-known piece Mortimer produced was “The Concept,” a play about drug addiction featuring patients from the New York drug rehabilitation center Daytop Village, where Mortimer was on the board of governors. “The Concept,” which was first performed off Broadway in the 1960s and then revived in downtown New York in the 1980s, featured a fictionalized version of the cast’s own struggles with addiction. The play was well received and was even performed at the Nixon White House.

Mortimer never shied away from addressing challenging subjects in his productions. He was an associate producer of “Dutchman,” a one-act play on racial conflict in the 1960s written by playwright and activist Amiri Baraka. He also produced a play called “Checking Out” for the Westport Country Playhouse about the right to die. In 1972, Mortimer co-founded the Manhattan Theater Club where he produced upwards of 20 plays and established the Club’s “Chamber Theater” program of script readings by professional actors.

In addition to supporting the arts as a philanthropist and producer, Mortimer flexed his creative muscle by playing piano and becoming a published author at age 75. He wrote five books on the topics of men’s fashion and business. His first book, The Executive Look: How to Get It, How to Keep It, was a New York Times Book-of-the-Month Club selection in 1981. Among the pithy insights in his books: “An aptitude for clothes was something I evidently was born with, in the same way that Babe Ruth, Mozart, Chris Evert Lloyd and Charles Chaplin were born with aptitudes that, in their respective cases, made them world-famous.”

As a man known about town for his impeccable taste and style, Mortimer served as the inspiration for a prominent Upper East Side restaurant named Mortimer’s. The restaurant, which opened in 1976, was started as a hobby of Custom Shop executive Glenn Bernbaum and became a favorite of New York society, serving well-known clients like Jacqueline Onassis, Brooke Astor, Calvin Klein and Gloria Vanderbilt. In 1997, at the age of 90, Mortimer sold The Custom Shop and transferred the proceeds into the Levitt Foundation. Inspired by the transformation of Westport’s town dump into a vibrant hub of activity presenting free concerts to the community, he envisioned a national network of Levitt venues, where free, live music would fill the air in towns and cities across the country. To lead the Foundation into the new millennium, he passed the reins to his daughter, Liz Levitt Hirsch, shortly afterward. Today, Mortimer’s, vision, ingenuity and indefatigable spirit continue to inspire and inform the Foundation’s approach to philanthropy. And we continue to heed the advice he offered at the end of every personal letter, “Keep smiling.” We will, Mortimer. We will.

Mimi Levitt (1921–2019) An iconic patron of the arts and historic preservation, Annemarie “Mimi” Gratzinger Levitt was best known for her intelligence, grace and hands-on...
Biography

Elizabeth Levitt Hirsch (Liz) is best known for her ability to connect and inspire people to achieve a shared vision to better our communities,...
View More